Kingston Technology is the leading global manufacturer of memory and storage solutions, but their IronKey hardware-encrypted portable data storage products were not as well known. Bluetext was specifically contracted to create a campaign that could educate the industry about the benefits of hardware encryption compared to software-encrypted, unencrypted, and cloud-based solutions. Centered around the specific hardware-based encryption, our campaign asks the rhetorical question of does anyone want their security to be ‘soft’?

The obvious answer being no, Bluetext focused the campaign concept around “Hard vs. Soft” things. Bluetext was challenged to figure out how to bring “soft” to life via 3D design. But how to memorably visualize this metaphor? A deep brainstorm by the Bluetext surfaced a quirky and nostalgic example almost anyone could relate to: Jello.

Behind the Scenes: Jiggly 3D Animation

Communicating the look and feel of Jello with its jiggly physical properties was a real technical challenge. Using Cinema 4D’s built-in Jiggle Deformer and Fracturing Objects, adding a little bit of smoothing and rendering with the built-in RedShift render engine in Cinema4D, we were able to get the look we were going for.

Does jiggling jello even make a noise?! We asked ourself this very question every day. We even made some jello (lime of course) and tested it out just to be sure. The answer is – not really. But that’s beside the point.

Sound design was a pivotal component of our concept. Essentially, didn’t want it to seem like the hard drive was exposing or stealing sensitive information. Also, with the international scale of this campaign (7 languages!), we couldn’t use a voiceover.

It was up to our sound designer to clarify the story of “jello safe, bad. IronKey, good.” Using a mix of digital, mechanical, tactile, and dystopian sound effects, our audio narrative both negatively reinforces software encryption and then victoriously reinforces how hardware encryption can save the day.

Designing the jello splatter portion? Let’s just say we spent some time in the “Gore” section of our sound library. I think our designer is still having some PTSD, but the end result goes hard, that’s for sure.

With 3D animation to support Kingston’s IronKey product, the campaign set out to break the mold of traditional cybersecurity campaigns. If you’re looking for some creative ways to shake up your campaign advertising strategy, contact Bluetext to learn about our video and creative services. 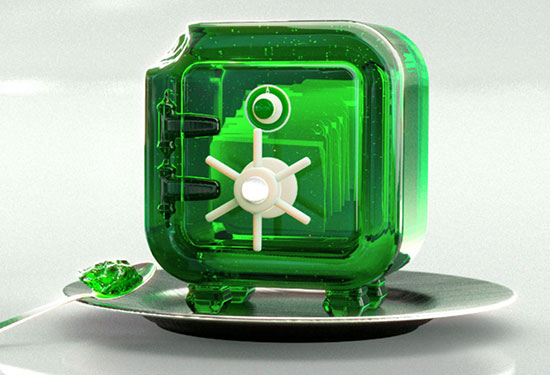